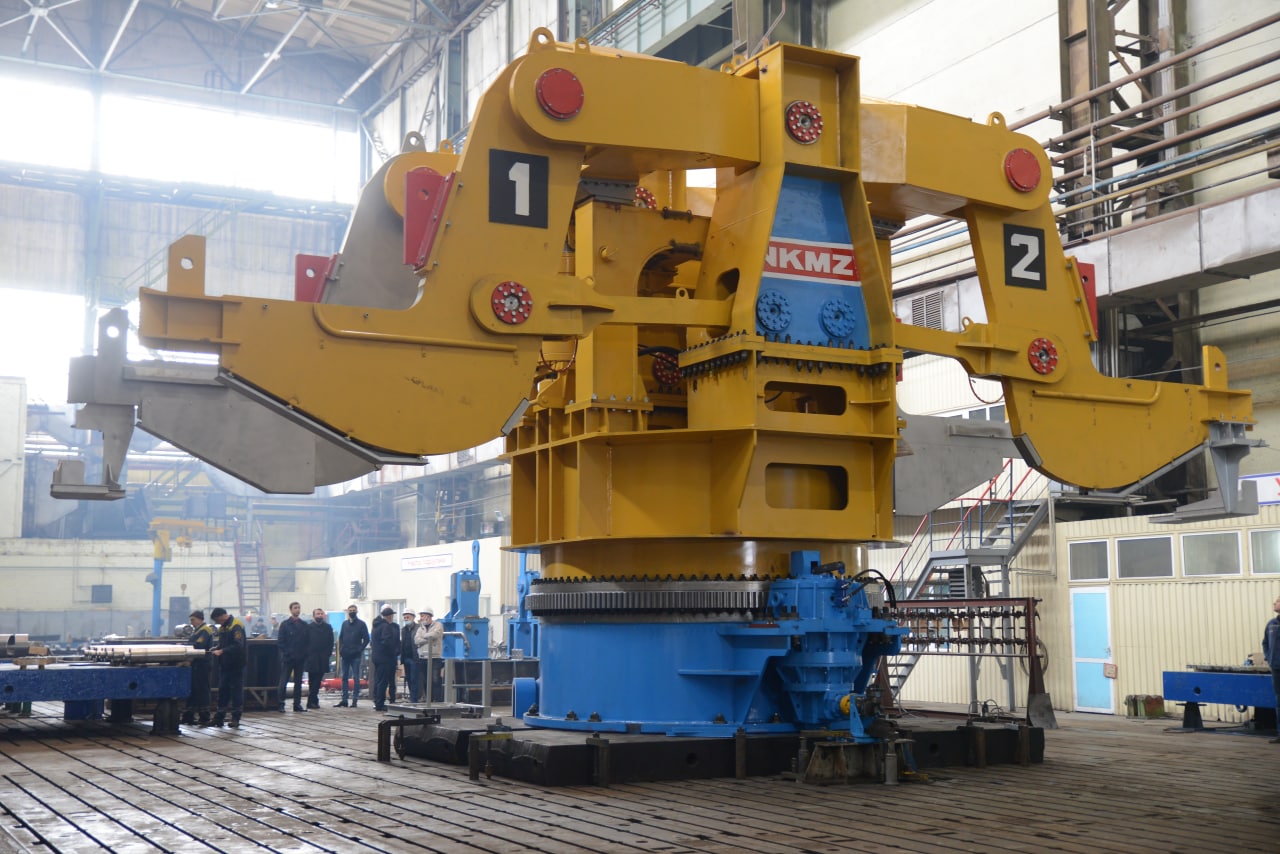 Novokramatorsky Mashinostroitelny Zavod (NKMZ) shipped to metallurgists of OJSC “Uzmetkombinat” (Bekabad, Republic of Uzbekistan) a modern ladle turret of a new design for a continuous casting machine (CCM). Even with a rather tight delivery time for this equipment determined by the customer, due to the optimal organization of production, the plant’s employees managed to ensure its early production.

The new turret will be installed in the place of its morally and physically obsolete dismantled predecessor. The start of installation work is planned immediately after its delivery to the customer in July of this year.

The turret for NKMZ is not only a jubilee one, but also a unique one. Its uniqueness is in its mobility. It will be installed on a self-driven roll-out platform (pictured), which will move it five meters away from the casting axis.

At the beginning of April, Uzbek metallurgists participated in the intermediate acceptance of the stand and were completely satisfied with its work during control tests in the workshop of our enterprise. They noted that they were not mistaken, choosing NKMZ as the turret manufacturer, and talked about the possibility of our further cooperation.

At the Novokramatorsky Mashinostroitelny Zavod, the issuance of documentation for the modernized cone crusher for coarse crushing with hydraulic adjustment of the slot model KKD1500x180 GRSH-M for Mining-and-Processing Works of Poltava has been completed. It is now under construction. As a result of the improved design of the crusher, its productivity will increase to 5.5 thousand tons/hour, which is 55% higher than that of the crusher used before.

In a cone crusher, material is crushed by compressing it between two armor profiles. One profile is set by the armors of the cone, the other by the crushing bowl. During their gyratory motion (complex rotation in several planes), the material is ground under constant compression.

The plant’s specialists already produced cone crushers of this standard size, but only of standard performance. Last year, such a crusher was manufactured and supplied to Mining-and-Processing Works of Ingulets, and today it is being installed at the customer’s site.

The peculiarity of the new modernized crusher is that at the request of the customer, it will be installed instead of the worn out and dismantled predecessor on the available foundations.

While maintaining the overall dimensions of the new crusher, its higher productivity will be ensured due to the improvement of the design of units performing material crushing, as well as an increase in the drive power. So, the profile of the armor, the profile of the crushing chamber and the main units on which the armor rests have been modified. The cone swing frequency became higher.