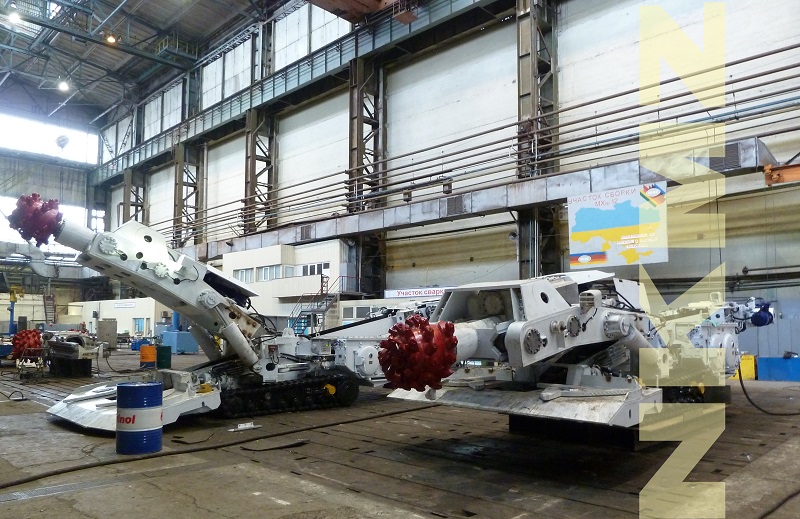 Novokramatorsky Mashinostroitelny Zavod is preparing for shipment to customers – mine named in honor of Space Heroes and Dneprovskaya (PJSC “DTEK Pavlogradugol”) two roadheaders of the new П110-03 model with the longitudinal-axial cutting crown.

Miners of PJSC DTEK Pavlogradugol duly appreciated the sinking equipment of NKMZ. Since 2017 the Novokramatorsk employees have supplied to them 21 roadheaders of the П110 serial model, which has two transverse cutting crowns. This roadheader is highly popular with miners in Ukraine and the CIS countries. It belongs to the lightest series and is used for the treatment of mine faces with rock hardness up to 100 MPa.

The П110-03 roadheader with the longitudinal-axial cutting crown was designed and manufactured by NKMZ at the request of the miners of PJSC DTEK Pavlogradugol especially for local mines with small cross sections of roadway. It is smaller and can be used in workings with the cross section of 7-25 m2. This roadheader differs from the serial П110 by a new operating member, which consists of the longitudinal-axial cutting crown, parallel shaft-type gearbox and a frame. This operating member and the operating members of other roadheaders of the П110 series are completely interchangeable.

The design of the new roadheader was developed by the specialists of the bureau of roadheaders and sinking equipment of the design-engineering department of NKMZ metallurgical and sinking equipment production division under the leadership of the head of the bureau Evgeny Klimenko. Leading designer of the project – Maxim Churikanov. Roadheaders were manufactured in machine-assembly shops No. 12, No. 6 and in workshop No. 16.

The range of cooperation between NKMZ and PJSC DTEK Pavlogradugol is expanding. Its new direction is the performance of capital repairs by the Novokramatorsk employees of the П110 serial roadheaders that have exhausted their service life, previously supplied to the mines of the joint-stock company. In March the documentation required for this was issued for production.