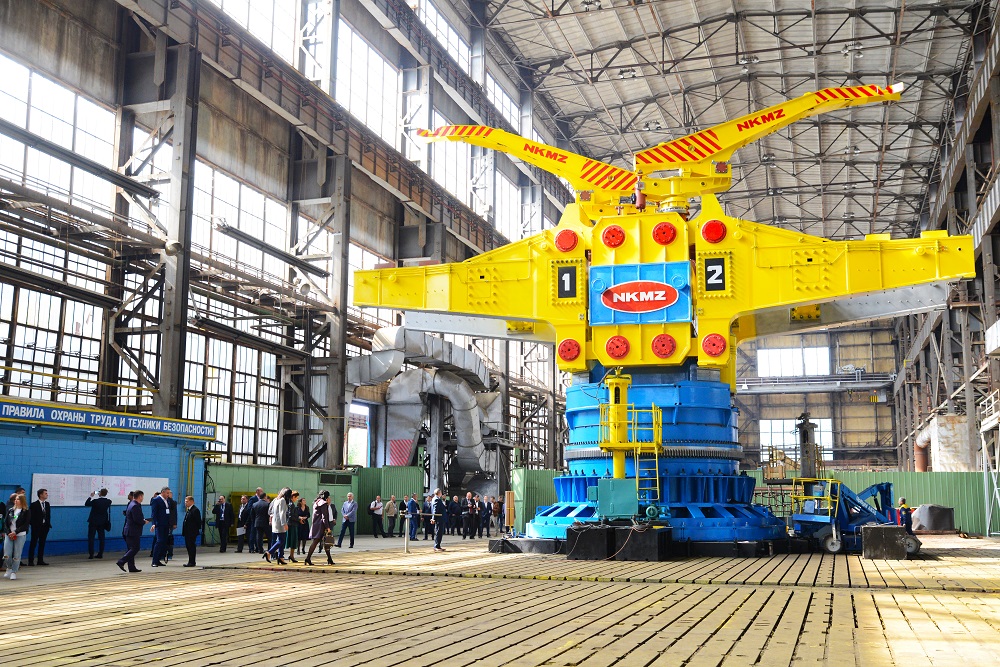 On September 20-21, Novokramatorsky Mashinostroitelny Zavod celebrated three holidays: the 85th anniversary from the enterprise commissioning; Machine Builders Day, the date of which associated with the commissioning of NKMZ in 1966; Day of the City. In 1932 due to the construction of the giant of heavy engineering Kramatorsk became a city.

Working team of NKMZ celebrated the anniversary presentably. Compared to 2018, sales volume grew by 37%, sales of finished products – by 29%, output of marketable products – by 20%. The average wage value of employees was increased by 44.6%. It amounts to UAH 15,421.7 for the first half of the year. The average wage of the contractor is UAH 20,023.6 (increased for 55.6%), the average wage of a machine operator is 22392 UAH (increased for 55.3%). The enterprise continues to perform works on technical modernization, ergonomics, development of modern communications, and improvement of designs and technologies. On the eve of the anniversary, the factory veterans received traditional financial assistance, which is one and a half times higher compared to the last year. NKMZ supports its retirees since 1992.

During the anniversary day, NKMZ received more than one hundred guests from the UK, France, Germany, Bulgaria, Slovakia, Poland, Belarus, Russia, Sweden, and from Ukrainian enterprises.

Guests visited workshops of the enterprise and saw a great variety of new modern equipment. Mostly the guests were impressed by Waldrich Coburg – the largest unique machining center installed in the mechanical assembly workshop No. 8. Visitors showed great interest in demonstration of products samples, including the П315 (P315) road header shown in the machine-assembly shop No. 12. It’s the most powerful road header in the CIS, manufactured for “Pokrovskoye” mine. The lifting-and-swinging steel-casting stand for the Dneprovsky Iron and Steel Works (Kamenskoe, Dnepropetrovsk Region) also  impressed them significantly. 13.5 m high powerful machine with a lag span of 21 m became an object of total admiration.
I am always surprised to see how NKMZ is constantly moving forward not only in technical capabilities and in the quality of its products, but also in the production culture, which is very important” said Jan Sheben, Director General of Imet Tec (Slovakia, Bratislava) during the tour. — Cleanliness and order, aesthetic improvements became the norm for your production. It has a good impression on customers visiting NKMZ.  It brings them only positive feelings and a wish to continue and develop cooperation with you. ”

On the day of the anniversary, many employees of NKMZ were awarded with the corporate titles “Veteran of Labor of NKMZ”, “Honored Machine Worker of NKMZ”, “Honorary worker of NKMZ”, grateful letters and certificates of appreciations from the board of the JSC and the trade union committee of the enterprise, city mayor, regional state administration.
During presentation of recognition certificates to the NKMZ workers, the governor of the Donetsk region P.A. Kirilenko noted the importance of NKMZ work for the city, region and country. He wished veterans and company workers health, prosperity and “peace to all of us.”
Summarizing results of the enterprise 85th anniversary celebration, the Chairman of the Board of PJSC, Director General of NKMZ G.S. Sukov noted that “NKMZ remains the best engineering company in Ukraine and the CIS, one of the best in Europe. In 2020 we will change amount of our deliveries from 79 countries to 80, or maybe more.”